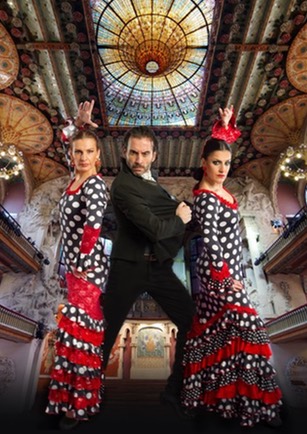 AL SON 5
A rate of 5 times adapted to flamenco with percussion, singing, playing and dancing.

TANGOS
One of the basic styles of flamenco song, there are several ways.

ALEGRIAS
One of the most cheerful and bright flamenco styles.

TANGUILLOS
Festive, cheerful and flirtatious Palo has an footwork.

SOLEA POR BULERIAS
It is the basis and rhythm with more force of flamenco.

BULERIA
Cheerful and most complete flamenco Palo both guitar and sing.
Flamenco is a style of music and dance that originated in Andalusia (Spain). Flamenco as we know it today dates from the seventeenth century, and is based on Andalusian music and dance. Singing, playing and dancing are the main facets of flamenco. Flamenco is Intangible Cultural Heritage listed by UNESCO since 1997 humanity.